The 2022 BSL Charity Tournament will be held on October 1-2 (Sat/Sun) from 9am to 8pm
at Brickyard Park in Mississauga
(3061 Clayhill Road, Mississauga).
Direct all inquiries to: [email protected]
All proceeds will go to support Pakistan Flood Relief through Islamic Relief Canada.
Thank you to our tournament sponsors: 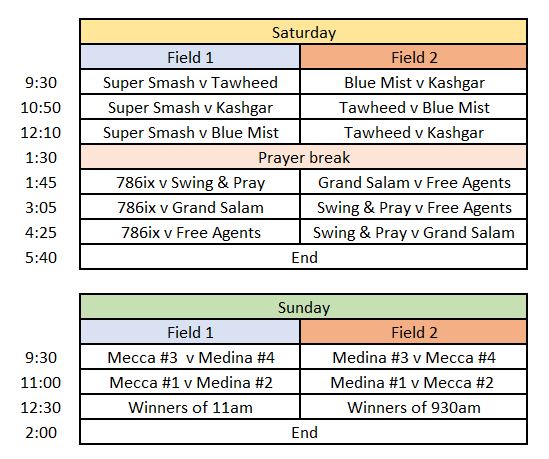 Tournament Format:
- All teams will play 3 round robin games within their division on Saturday
- Round robin games will be 75 minutes maximum or 7 innings. No new inning with less then 10 mins left.
- Top teams from the division will go to the Championship bracket on Sunday and bottom teams to Consolation bracket.
- On Sunday, games will be 9 innings or a maximum of 90 minutes. One game elimination.
- The higher seed will be home team. If both teams are seeded the same, coin toss will take place.

Tournament Rules:
Teams:
- EVERY TEAM MUST BAT A OF MINIMUM 10 PLAYERS and a maximum of 14 players (less than 10 is automatic out at bottom of order)
- Substitutes are allowed during the game. Once a player is substituted out, he can no longer return to the game. The substitute player will bat in the order of the player he is replacing
- Injured player is allowed to be removed from the game without being an out. Any other player being removed without a substitute will be deemed an out.
- Rosters must be submitted by Thursday night with a maximum of 15 players on the eligible roster
- Teams are limited to 1 non-Muslim per team.
- Every non-BSL player must sign a waiver before they are able to play
Games:
- Tie breaker will be Head-Head then Run Differential then Runs scored
- Home team will be determined by a coin toss except in playoffs. Higher seed will always be home team in playoffs.
- All games will be a maximum of 75 minutes and no new inning can begin with less than 10 minutes remaining
- Games will be a total of 7 innings (or as long as time permits)
- All at-bats will begin with a 1-1 count; foul with two strikes will be a strikeout
- 5 run mercy per inning except for last inning
- 15 run differential after the 5th inning will be a mercy end to the game (unless both teams agree to play)
- Maximum 15 run differential will be used regardless of the final score of the game
- 4 courtesy runners per game with only the last player called out being allowed to be the pinch runner (except if a player is injured during the game)
- Maximum 3 homerun differential (over the fence); any further homeruns are considered an out
- All bats must have USSSA or ASA stamp to be permitted for play. Any violation will result in withdrawal from the tournament
- Both teams are responsible for verifying the score with the umpire after every half inning
- Any rule not mentioned will follow standard Brotherhood Softball League rules
Code of Conduct:
- All players are expected to abide by the brotherhood code of conduct. Absolutely no swearing, taunting or trash-talking of an opponent will be tolerated. Anyone violating the code of conduct will be removed from the tournament and will be considered an out for every time he misses an at-bat during a game.